Football fans all around the world are thrilled as Lionel Messi and Cristiano Ronaldo show everyone that they certainly aren’t done yet. In one night, they both have 7 combined goals.

Argentina beat Estonia 5-0 in a friendly match. All 5 goals were scored by Messi. Many football fans have claimed that his career started to go downhill following his transfer to PSG. He finished this Ligue 1 season with 6 goals and 14 assists. This has been a season to forget for the arguably greatest football player of all time. However, this magnificent performance against Estonia has been one of his best of his entire career. Scoring 5 goals in a single match is a feat very few players have achieved.

The same night, Cristiano Ronaldo scored 2 goals against Switzerland in the Nations League. Portugal won the match 4-0. Ronaldo, like Messi, is considered by many to be the greatest player of all time. Although he scored 18 goals this Premier League, the season hasn’t been near his best. However, he too had a great match.

Fans of both Messi and Ronaldo are happy to see that both players continue to excel, and that their rivalry remains a tough one. 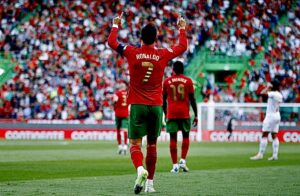